YES!  A bowl!  After the kickass time I had at Werrington skatepark I was itching to find another bowl to have a carve in.  Yet again I couldn't find any information on this skatepark other than a vague hint that it might exist.  I headed into Hampton, which is a bewildering experience in itself and headed for anywhere that looked like it might be a big enough space to host a big skatepark.

After parking in the nearby community centre myself and my daughter trudged across the boggy field to take a closer look at what would be our second bowl of the weekend.  There was zero chance we'd actually get to skate, it was pissing it down with rain.

From what I gather Hampton skatepark is almost brand new and it looks like a ton of thought has gone into it.  There is a huge variety of fun ramps and trans through out the main plateau of the park.  There are also some decent size wide open spaces, something that's really useful for new skaters to use to find their feet.  The real star of Hampton Skatepark, and the biggest part of the reason I hunted down this skatepark was the kidney bowl.  So we carefully walked to the far end of the park where I assumed the bowl was.

Unfortunately it wasn't only the rain that stopped us from skating at Hampton.  The bowl was in a condition that was far from skateable.  Partly possibly due to a drainage issue that is a teething issue of some new skateparks, but also due to the large amount of rubbish that was filling the deeper part of the bowl.  Including a large mattress.

I know tons of hard work goes into getting skateparks built so I'm not going to dwell on the negative aspects of Hampton skatepark.  The rest of the park was pristine so I'm going to very optimistically hope that some kids threw the mattress into the bowl in an attempt to soak up the water.  But as for the rest of the trash, well who knows.

When I go back to Peterborough in a few month's time I'm going to head straight for Hampton skatepark.  If the ground is dry and the bowl is empty it's going to be amazing!

If you have never visited Hampton skatepark please ignore the state of the bowl in these photos, I'm sure it's all been fixed up and is skate-able by now. 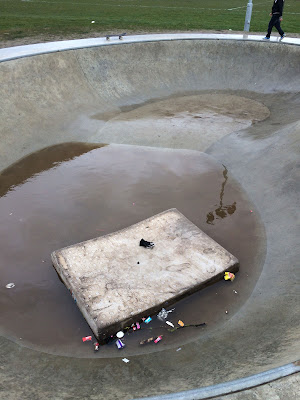 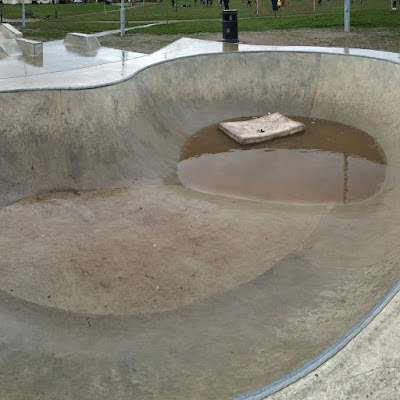 (also has some nice footage of Bretton skatepark)

Hampton Skatepark is currently incorrectly labelled as 'Bretton skatepark' on Google Maps. I've suggested they correct it. Watch this space.

This Instagram photo may or may not explain the mattress:

Buy me a pint!

If you've found this site helpful feel free to buy me a pint! Click here...